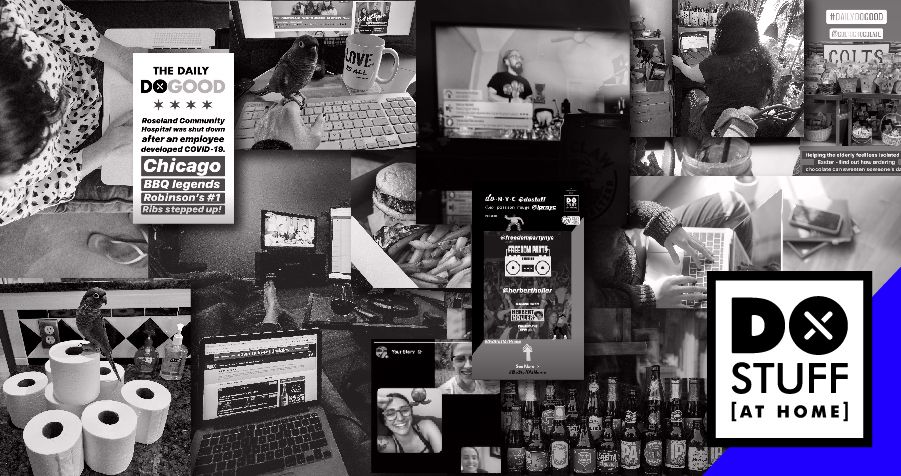 ...And we fought back

Go Team Go. The unofficial new rallying cry of our team as we cheer each other on from the confines of our home.

This is not simply a post of expression. This is a post about WHY DoStuff. Whether you’re an artist or a brand mucking your way around COVID-19. Whether you work with us right now or not. Why DoStuff. I hope you'll entertain us and read.

We want people to know: We’re still here. The business, the audience, and all of the people on our team. The impending pivot from my last post has happened and not only are we still standing - from an audience and engagement perspective, we’re thriving. We're continuing to drive action. Albeit a different kind of action than we'd ever imagined. We don’t know what the next few months will bring but we know that right now there is nothing more important than continuing to use our voice to bring people together in a circumstance where that can feel nearly impossible.

I vaguely remember a few weeks ago writing a post of our intent to fight. It feels like years have passed within the span of days. I’m sure this is no different than most everyone out there.

My concerns about life are still there:

But, there is a notable clarity of purpose across the team. While we aren’t on the front lines saving lives, what we’re doing right now is important.

DoStuff was a local and independent beacon of the good times. When you could go out. When you could see your favorite band. When you could be with your friends. Right now, we’re still that, but in your house. And we’re starting to see what we’ll look like when this is over.

I’ve always felt DoStuff has been a bit of the underdog. We’re your local grocery store compared to Whole Foods. Or more fittingly, your College Radio compared to Top 40. We have independent sites in every city, we’re super important to communities but have flown under the radar to corporate marketers. We chose to self fund in order to build the exact business we wanted, we chose passion over scale - creating real meaningful content and community, we launched city by city with partners who were the music heroes that made those cities great. All of these decisions have meant a lot for our business - some of those things are amazing, others have made this really tough. There have been plenty of reasons to throw in the towel and move on. But. We couldn’t. There have been more reasons to keep growing, and growing, and growing - the general knowledge and pervasive belief of the power of what we’ve steadily built, and the community that has gathered around us and now relies on us.

The past year or so has been monumental. We slowly started acquiring our sites and backing away from the “franchise” model. We LOVE our independent site owners, and this was not an easy decision, however many owners agreed it was time to let DoStuff take the reins. Most of the previous owners are still actively involved, Mitchell Frank of Spaceland notoriety in LA has even joined our board.

Up until March 2020, DoStuff had our best 12, 6 and 3 months to date. We nailed our value proposition to the local entertainment industry. We packed venues. They validated us as the audience’s go to source. We relied on each other. It worked.

On top of that, we piloted a subscription product in Chicago that we scaled slowly for a year as we learned how to ensure we could provide a great service to venues and users alike. We had just launched a campaign to take us from 5,000 -> to 50,000 subscribers in Chicago and were beefing up our team to launch subscriptions in LA.

The crushing realization that all of that progress was getting hurled into the great unknown became very real. But what I also now know is real is the work we’ve done - both the decade of planting the seeds and the year of tending the garden - was critical.

Critical because we need to be here right now. If nothing else we have 32 people who rely on us. Those 32 people need to feel meaningful to the cities they serve. Without our own sense of purpose I’m not sure we could survive this as an organization, or as the people we are. But above all of that, we have a significant community of artists, music venues, bars, festivals, service industry folk, etc and an even larger community of fans of those institutions in need of our support and a need for a pure and meaningful connection right now.

Perspective is paramount right now. We have our lives, we still have our health. We aren’t healthcare workers or grocery store workers or any of the others on the front line literally ensuring the rest of our lives continue to march on.

But beyond those necessities is a world we’re all mucking our way through, indoors and mostly alone. The inherent challenges of that dim lifestyle deserves a light.

DoStuff has pivoted hard and fast to shine that light, and by all measures we’re doing a phenomenal job. We were built for this. And we’re building from this.

It’s only what, three weeks in (of proper quarantine)? And we’re Growing. Despite how clearly we knew that we had to pivot and that the pivot would help a lot of people, growth wasn’t really a part of our internal conversation.

Here is where I circle back to the underdog and start to brag a bit:

The first weekend we marketed our launch of DoStuff [At Home] in partnership with DJ Mel (of Obama fame) we had more live streamers than Coldplay and Calvin Harris. Why? Because we provided more than a name. We provided community. The 62k comments on a local Austin DJ party prove the human need for connection. People can’t watch Netflix all day.

We’ve continued from there and are layering on more and more ways to support and connect with the community - virtual happy hours with your favorite bartenders, GoFundMe’s to raise money for the local artists and venues, where to get a job right now, how to volunteer, indoor family friends activities. The content isn’t novel, but we’ve spent years developing community and our reach is hard to replicate.

We keep pushing forward. We are taking a local Austin festival to a national audience, we’re keeping the national 4/20 celebration alive, we’re working with our partners to ensure we help the celebration of Pride, and much more.

This pandemic can’t curb the human spirit. We’re alive and we seek to connect. The conversation right now is global. We have a national presence, but know more than anything that nothing can compete with local roots.

We know what we’re doing is working. Over the past two weeks our email engagement is up 38%, our editorial traffic is up 46%, Instagram engagement is up 64% and Twitter engagement is up 41%. I’ve never measured random inbound communication from our audience but the amount of time I’m spending responding to random lovely humans thanking us is up 1M%. Those emails are priceless. They keep me going.

I’m not here to take away from anyone else in our space - be it the entertainment space, the media space, the you-name-it space. But I am here to say that what people need right now is to FEEL CONNECTED. The traction we’re getting is speaking for itself. Yes scale is and always will matter. But perhaps in this new world there will be more focus on what really matters: positive human connection, social good, and making things better (or at least more fun).

What I realized is fuck yeah what we are doing matters. It perhaps matters more than ever.

*Edit - we have since launched the DoStuff Amplification Project, awarding $1m in paid media to the DO'ers who need to get the message on what they are doing out there - the bartenders hosting virtual cocktail hours with virtual tip jars, the local band live stream to continue being a local band, the improv actor doing improv, and all our friends in the service industries who are making, building, creating and need a platform for showing people. DoStuff is nothing without our audience and their participation, so that's where we've decided to support.